Tucson Water now has a Facebook page for Sweetwater Wetlands. While they don’t update it every day I still suggest Liking the page so you can stay up to date. For instance, Tucson Water is partnering with Tucson Audubon Society for Tucson Meet Your Birds this coming Saturday, 10-22. The event will feature guided bird walks, optics demos, food trucks, rescue birds, and REI will even have a table. Sounds like this event will have a little bit of something for everyone!

“The #SweetwaterWetlands logo from 10+ years ago; used in the Field Guide and the brochure.” – from Sweetwater Wetlands Facebook post.

Comments Off on Sweetwater Joins the Modern Age

Cornell Lab of Ornithology’s Macauley Library has launched MerlinVision, a program that will be able to identify birds in photos. Of course, MerlinVision needs a lot of training and you can help. If you already have an eBird account just sign and start drawing boxes. Don’t have an account? It is easy to sign up!

The project is rather absorbing and is a great way to give back to the birding world (especially on a bad weather day). I forced myself to stop at 100 for my first session and I’m sure I’ll be back at it soon.

Comments Off on Help Merlin with Birding ID

There are all kinds of techniques to locate and identify birds. In addition to size, plumage,  and coloring it can be beneficial to learn the habits, songs, and feeding techniques of the most common birds in an area. Unfortunately, the birds do not read the same guide books, so they don’t always follow the rules.

A recent trip to Sweetwater Wetlands proves my point:

When I scan the tall trees against the horizon at Sweetwater I’m expecting a Cooper’s or Red-tailed or possibly a Harris’s Hawk, near dusk there’s a slight chance of  a Great-horned Owl. Instead, 35 feet up in a cottonwood I found this Green Heron:

For a bird that fishes while perched like a statue on a low-lying limb over water this is truly out of character. Keeps us birders on our toes!

Comments Off on Birding Challenges…

Inviting Birds to Your Yard

There are numerous ways to make your yard bird friendly. Beyond the obvious (such as putting out bird food and water) is growing native plants that provide shelter and/or food. Even less obvious is supplying good nesting material. This article provides great information about how you can help your local birds build their nests.

Comments Off on Inviting Birds to Your Yard

Great write-up by Audubon about the new animated short featuring Piper, a young Sanderling. This short will precede the new Disney movie, Finding Dory. I am suitably impressed by the creative team’s efforts to stay true to life.

Shore birds often stop in at Sweetwater Wetlands during the winter. Yet another wonderful surprise that the Wetlands offer.

Join me tomorrow morning at 7:30am as we wander the trails looking for birds and other interesting creatures! More info on this Calendar: http://www.pima.gov/nrpr

Comments Off on Piper by Pixar

A big thanks to Rich Ditch for putting together this very helpful guide! Good for a rueful chuckle, it does feel this difficult sometimes when trying to identify these quick moving birds.

Join me at the Wetlands this Friday at 7:30 for a leisurely birding adventure. We’ll do our best to identify all our feathered (and furry) friends.

Comments Off on Easy Guide to Flycatcher ID

An informative article from Audubon on how to attract hummingbirds to your yard. They need more than just a feeder – they also need plenty of bugs and spider webs (the latter are vitally important if they are nesting).

I have several feeders and plenty of bugs now I need to work on a small water feature for them. I know they love to bathe and splash and it would be great to be able to watch them do that in my own yard.

Sweetwater Wetlands offers everything they need to thrive. We’ll see some on my upcoming bird walk this Friday at 7:30am. More info can be found on Pima County Natural Resources, Parks and Recreation Calendar.

Comments Off on Helping Hummers

Why Woodpeckers Don’t Get Headaches

This article is a few years old but very informative. Especially the discussion about how the length and shape of woodpecker tongues differ depending on diet. Flickers have the longest tongues which are sticky and help them grab their favorite food – ants.

Ah, the fascinating world of birds! 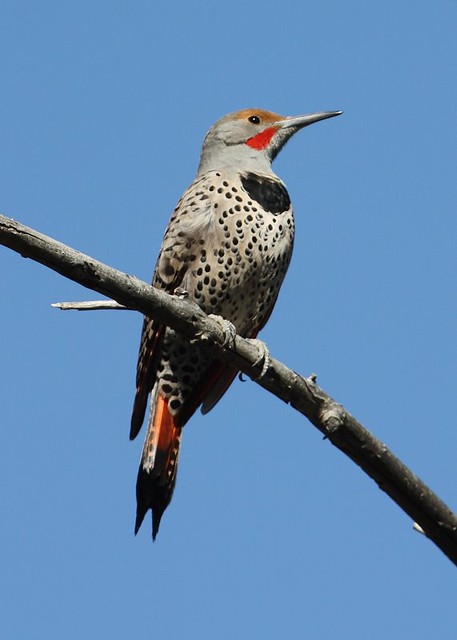 Comments Off on Why Woodpeckers Don’t Get Headaches

Every year Tucson Water partners with the Tucson Fire Department to conduct a controlled burn of the Wetlands. Half of the park is burned in an effort to keep the cattails from overtaking the ponds, opening precious habitat for the waterfowl. The effort also minimizes breeding areas for mosquitoes.

There will be a huge cloud of thick black smoke. Don’t fret, the large trees are spared, the birds and other wildlife can still use the other half of the park, and the plants grow back quite fast!

The park will be closed for the entire day and is scheduled to re-open the next morning. If the weather doesn’t cooperate the burn will take place on Tuesday, 03-15. More info: 2016 Controlled Burn flyer

Exciting new website from National Audubon Society – an online bird guide in Spanish! Not only is this an easy to use reference for those who speak Spanish but it provides extra information for bird nerds (like myself).

My favorite example is one of the Southwest’s most curious and iconic, the Greater Roadrunner (Spanish name – Correcaminos norteño).  Named for running roads in both languages…which of course begs the question, what was it called before there were roads?

The best part of the new site? You can search for a bird using either the English, Latin or Spanish name. Very cool!

Since we’re talking about Roadrunners, Tucson Audubon Society’s next Living With Nature program in Tucson will feature Doris Evans’ experience photographing and filming a Roadrunner family in her yard. I plan to attend for two reasons, she lives near me so the information will be especially pertinent but also because the photos I’ve seen thus far are captivating. The event is free and open to the public.